Anatomy of a Carnivore

Anatomy of a Carnivore

There are some differences in dogs and wolves, according to Ray Coppinger, a professor of biology at Hampshire College in Amherst, Massachusetts. He reports dogs skulls, teeth and brains are smaller than wolves, with a 20% smaller brain. Dogs can also carry traits of a sickle-shaped tail, floppy ears and pie-bald color patterns. Domestic dogs also come into heat twice a year, while wolves only do so once a year. Dogs also continue to show submissive behavior all their lives, such as licking and greeting their masters the way wolf puppies do to the older pack members.

Some of this is believed to have evolved due to humans selection of dogs. Humans tend to prefer more submissive dogs, that carry more neoteric, or immature features. It is felt submissive dogs would adapt better in human families, and humans preferred the less threatening look of a dog that carried juvenile features.(wagging high carried tail, larger eyes and licking the owner).

It is also interesting to note that all domestic dogs, from the Chihuahua to the St. Bernard carry the same DNA patterns. This suggests that dogs have a single, rather than a multiple origin. The only domestic dog that varies is the Arctic Elkhound, which appears to have evolved separately. These new studies, done by Robert Wayne, a University of California-Los Angeles evolutionary biologist shows wolves are the closest species to the domestic dog. This is the largest study ever done in this field, and includes 140 domestic dogs, covering 67 purebreds and 4 crossbreeds. This was compared to samples of DNA collected from 162 wolves, in 27 localities worldwide.

Wolves are members of the carnivore family, known as canis lupus. The domestic dog is also of the carnivore family, known as canis familiaris. The book, “The Carnivores”, written by R. F. Ewer (lecturer in biology at the University of Ghana) states that “Canis Familiaris is generally believed to have evolved from the wolf, the wild species that most closely resembles both anatomically and behaviorally. The differences between the two are not great enough to make it necessary to postulate a hypothetical ancestral wild species which has neither survived to the present day not left any known fossil remains.”
Some typical features common to carnivores are a large mouth opening, a single hinge joint that lays in the same plane as the teeth, and a large primary muscle on the side of the head for operating the jaw. The teeth are short and pointed, made for grasping and shredding. These teeth come together to give a cutting motion and act like shears. The teeth and mouth of the carnivore are developed to swallow food whole, not for chewing or crushing. Carnivores do not have digestive enzymes in their saliva. Humans have amylase, which helps to begin to break down complex carbohydrates. The dogs digestive tract is one-third to one-half the length of an omnivore. This shortness is designed for adaption for quick, muscular digestion of raw meat and bones. Carnivores have a much higher concentration of hydrochloric acid in the stomach for break down of proteins and to kill any dangerous bacteria. Their stomach acidity is less than or equal to pH 1 with food in the stomach, while humans are pH 4 to 5.

It is interesting to note that dry dog foods are mainly cereal, consisting of a large part of corn, wheat, rice and soy. While dog food companies would have you believe that grains are a good source of protein, the fact is that dogs have a very difficult time digesting and utilizing protein from carbohydrates. Studies show dogs do best on animal protein, and the higher the quality, the better the protein is assimilated. The poorer quality proteins create a stress on the dogs kidneys and it makes proper nutritional digestion difficult.

Dr. David Kronfeld reports that carbohydrates are most important for dogs in two situations: puppies just coming off the mothers milk (which is 12% carbohydrates) and the lactating bitch, who needs three times the usual turnover of blood glucose for production of milk. He goes on to state that “no carbohydrates need be provided in the diet for pups after weaning or adult dogs, not even for those subjected to hard work. The liver is easily able to synthesize sufficient glucose (from amino acids derived from protein and glycerol derived from fats) for transport in the blood and utilization in other tissues.” He also goes to state that he feels the high carbohydrate content in dog foods is what contributes to coprophagy (stool eating), and hypoglycemia.

Dr. Kronfeld does state that of all the grains, oatmeal is resistant to milling, and since it is available in flaked form, it makes the best choice for dogs, as it has a higher protein and fat content.

Cooking animal protein also changes many of the amino acids chains, and makes some of the amino acids they need unusable or destroyed. Dogs’ need for amino acids differ from humans, and raw meat contains many or most needed for good tissue health, immunity and good coat and skin for carnivores.

Lastly, cooking and processed foods, such as dog foods, creates difficulty in digestion. It can take up to 15 hours to digest processed foods, while fresh foods digest in about 4 to 6 hours. The longer food stays in the system, the greater chance of allergies and digestive upsets.

Good for boarding services only.

Click Here to find out how to get your discount!

Be sure to check our FAQ's for more information and answers to many questions. 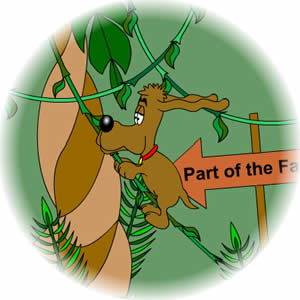 Have You Heard About Our New Customer Discount?
Click here for details >>